It occurred to me this weekend that I spend such a great deal of time looking up other people’s recipes only to change them to suit my palette and my cupboard, that I might as well start writing my own recipes. I have enough experience under my belt to make sensible choices and in any case cooking for me is about fun and experiementation. I decided to make tea loaf, inspired by a slice that I ate on Sunday after running group. The slice that I ate after running for over 30 minutes was so tasty, moist and refreshing, that I just knew that I had to make my own version. I also needed to cheer myself up because this was the result of my Sunday running…

Sore ankle from running this weekend and bruised toe from skiing earlier this year. I am not doing well!

During the Easter break sorted out my  mountain bike and took it out for a long ride on the Thursday the following week. I cycled all the way over to Buckhurst Hill to the Roding Valley Reservoir. It is a beautiful place where I would go with my family during my childhood. 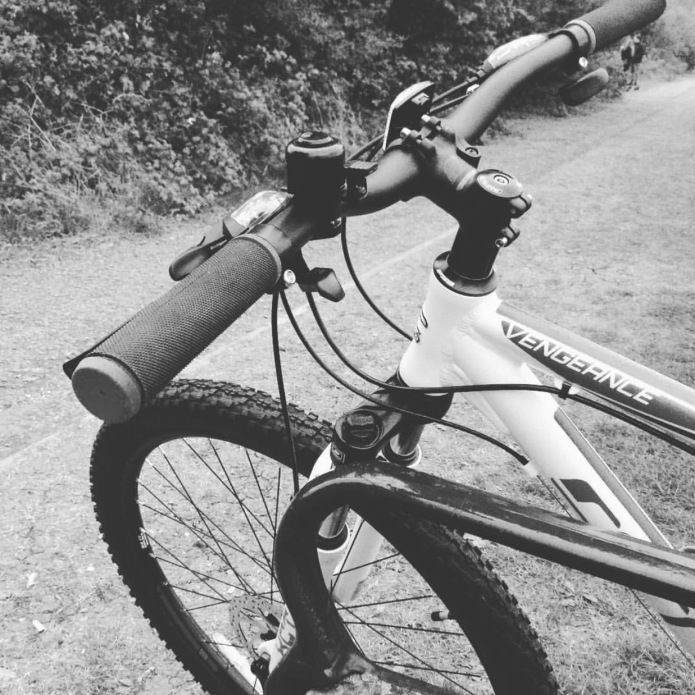 I rediscovered my love of cycling and the outdoors

I then went running on the Sunday and found myself limping by Tuesday evening. With painkillers and rest I thought my ankle had healed but it seems that running this Sunday just aggravated the whole thing again. My limited research tells me I might have something  called peroneal tendonitis, however even though I am a doctor myself, I might just let my GP look at this and advise me. In the meantime, after the application of ice, rest, elevation, and ingestion of analgesia, I was able to step bravely into the kitchen and execute my plan.

Somehow, despite identifying as English (when it suits me…) the tea loaf seems to have passed me by. Or maybe it has been so long since I have eaten one, I’ve just forgotten about their exisitance!

Here is what Wikipedia has to say on the matter.

A tea loaf is an English cake, made with fruit and cinnamon (or other spices), and traditionally served sliced and spread with butter. Tea loaf is now somewhat old-fashioned but is still available, and is particularly associated with Yorkshire.

Often in the making of tea loaves, the fruit (usually currants and sultanas) is soaked in cold tea to plump it before mixing it into the batter.

Similar breads in the British Isles include the Welsh bara brith and the Irish barmbrack.

And so I spent some time reading about how other people make this loaf and then made up my own version. Some recipes call for butter and others do not. I opted for the ‘fat free’ version. I also decided to use the coconut sugar that I had bought this weekend and added orange juice and zest.

It turned out  nice. I enjoyed a slice with my mother who had kindly come to my flat to give me something for my foot.

Juice and zest of one orange

1. soak the raisins in the tea and orange juice and zest for 2 hours

2. Add the flour, spices, egg and sugar to the raisin mixture.

3. Put into baking loaf tin lined with a baking paper and bake for 1 hour.

4. Remove when golden brown and cool on wire rack.

By Bunminola Bakes
On 1st May 2017
Leave a comment

mini-break to Devon
Pretty and pleasant

A jolt to the mind...
Wise words

capers are off the the menu
Vermicelli, rosa harissa, capers and olive